We awoke this morning to weekly market day that had transformed the parking lot across the street into a riot of color and aroma. There were foods of so many sorts: sausages, olives, something we decided were “tomato hamburgers”, and handbags to carry it all home in. This happens every Saturday in Arles. We could live like that (as customers, that is!). 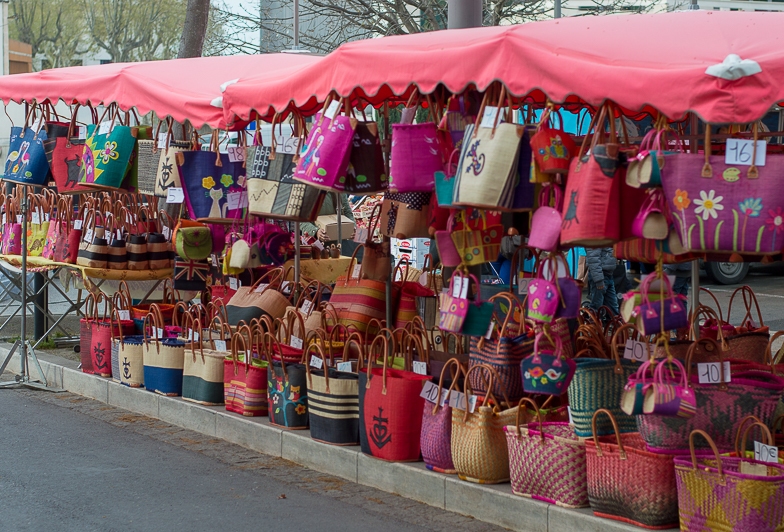 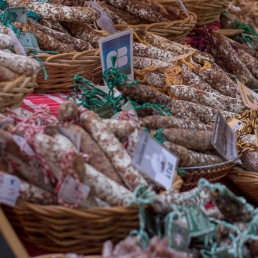 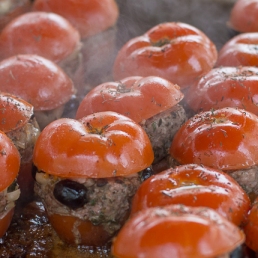 We went from there to the Musée Departemental Arles Antique, where we learned about this city that had been a Roman metropolis beginning before the birth of Christ. This model shows the arena and the amphitheatre, both of which are still in use today, although for different purposes. Just above the oval of the arena and the semicircle of the amphitheatre you can see the Forum. Today it is simply a town square called Place du Forum, which houses a variety of restaurants. If you choose the Tavern of the Forum and talk nicely to the right waiter, you can sit in the same seat that Rick Steves sat at. (If the name Rick Steves is new to you, just go to a good book store, find the travel section, and count the number of yellow and blue guidebooks. They’re his.) But I digress. Beyond the city center was the “cirque”, a center for racing. If you’ve seen the famous chariot race in the movie Ben Hur, you get the idea.

The museum is justifiably proud of a remarkable artifact from Roman times. A 30-meter long barge (chaland) that had been discovered at the bottom of the Rhone in 2004. It apparently sank around the beginning of the first millenium AD in the process of delivering limestone slabs. It was painstakingly recovered and preserved and has been on display since only 2017.

After an education into the very ancient, we went looking for the very modern new museum being built by LUMA, a foundation established to preserve and protect the arts in Arles. The building is designed by architect Frank Gehry (also designer of the new Louis Vuitton Foundation Museum in Paris). This photo shows it is still a work in progress, but it has made enough progress that you’ll recognize it when you come to see it for yourself. 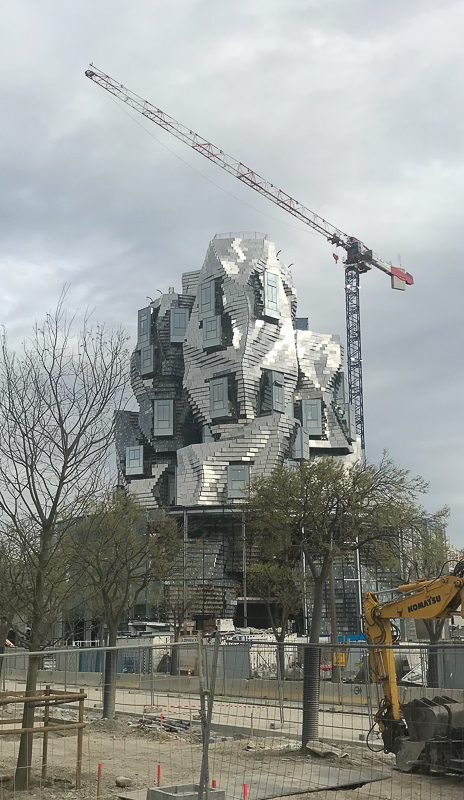 And finally, on the way back to the apartment, we encountered a friendly game of petanque in a working-class neighborhood. Unfamiliar with petanque? It’s the French version of a hundred different versions of games with the same objective: get your ball (or horseshoe or curling stone) closer to the target than your opponent’s. The first picture shows how close you can get (the target is the small ball). The second photo shows what happens when your opponent is as good as you and goes next. The brass-colored ball has just struck the silver-colored ball after being tossed from about twenty feet away.

They were very cordial and invited me to play, but I declined, claiming my
preference for photography, not wanting to reveal my novice standing.