After Paris, there is little doubt about Anita’s favorite place in France.  It’s on the left bank of the mouth of the Seine River, right across from the city of Le Havre, and it’s called Honfleur.  It’s home to Erik Satie, turn-of-the-20th-century composer of avant-garde music, as well as Eugene Boudin, 19th-century painter.  Today it seems to thrive on tourism, being just across the English Channel from Portsmouth.  It appears that the second language here is British, and most of the boats in the marina are British.

Because of this, the town has managed to preserve its sea-going legacy.  The little church in the center of the marina photo above was decommissioned long ago, but has been preserved as a museum dedicated to the memory of the seagoing men and their families who put this town on solid economic footing.

This is our third visit to Honfleur, and the first in the autumn.  Because of the earlier sunset time, we don’t have to stay up late for nightfall, when the marina takes on a different personality. 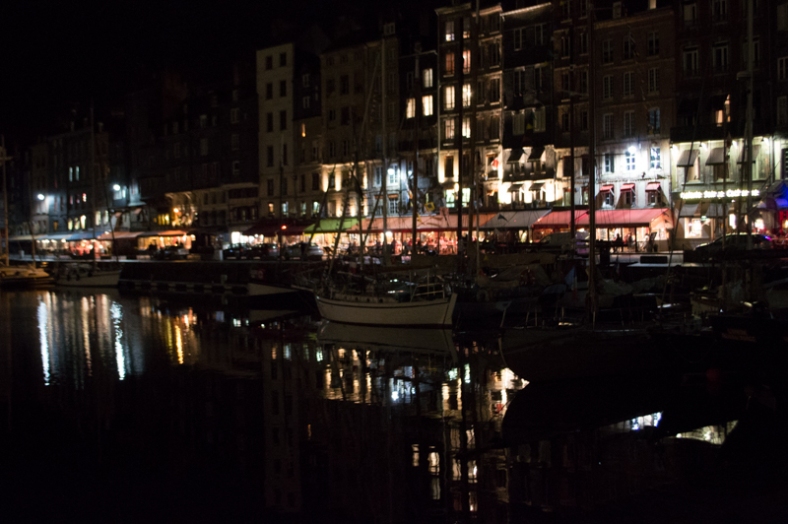 Having dinner at dusk, waiting for night to settle over the water is a perfect way to end a day of driving across the French countryside.

In case you’re wondering, Anita had that quintessential French dinner, hamburger and fries, and I had scallops and pasta.

After a good night’s rest, tomorrow we head down past the Normandy beaches to spend the afternoon and night on Mont Saint-Michel, as pilgrims began doing over a thousand years ago.  But more about that tomorrow.