Last year, I decided Anita needed a champagne vineyard.  Most Americans have heard the expression “champagne tastes on a beer budget.”  That pretty well describes us, so what to do?  It turns out, through a miracle of modern marketing (here, for example), that you can get not exactly a whole vineyard, but a token presence in one by virtue of a three-year certificate of “rental” of a vine in a vineyard.  Close, yes?  Close enough to get discounts on the wine made there, as well as private guided tours and tastings.  Anita got her certificate and first bottle of champagne from her very own vine for Christmas last year, and her guided tour today.

We spent the misty morning at Champagne Fresne-Ducret just north of Epernay, about which more below.  It’s a lovely vine-to-bottle business operated by a young couple, Pierre and Daniella Fresne (pronounced like “friend” without the “d” at the end).  Daniella spent close to three hours with us showing us the vines and the wine-making process, as well as letting us sample some of the finished product.  From an engineering point of view, it was fascinating.  I didn’t know the mechanical aspect of wine-making was so complex.  All these high-tech 15-foot tall blending vats require significant skills to make sure the right blend of grapes is in each one for the several months required to move on to the next step in the process. 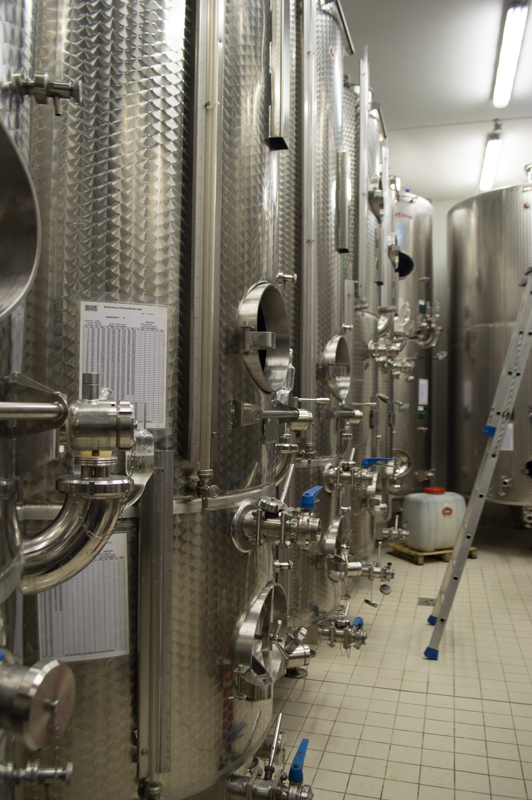 On our stroll down the hill from the blending house to the cellars, I asked about the rosebushes at the ends of many of the rows of vines (now past their peak season, just like the grapes):

It turns out that traditionally they were used as sentinels.  They were subject to the same diseases as the vines, but showed symptoms much earlier.  The grower could tell by glancing at the roses how healthy his vines were.  That seems to be a thing of the past, and now they either don’t exist at all or serve merely a decorative purpose.

In contrast to the sparkling tech of the blending house, the aging cellars were a study in low-tech dark, damp, coolness.  The wine, not yet bubbly, must spend a few years (usually four years or so from grape to retail sale) settling, called “riddling”.  These racks are specially made so the bottles can be rotated and the angle of tilt of the bottle can be changed slightly, from near-horizontal to about 45 degrees, over a period of many months, allowing the “lees” to settle out to the mouth of the bottle, where they can be easily removed leaving a pure, clear liquid.

All of this goes a long way to explaining the adage I mentioned earlier.  This much time and effort leads to high prices.  And in some cases, high prices lead to wealth.  Which brings us back to Epernay, where our B&B is, and where a few other little bungalows exist for the comfort of the large-scale producers:

When you have a tower like this marking your presence, you can afford a home like those: 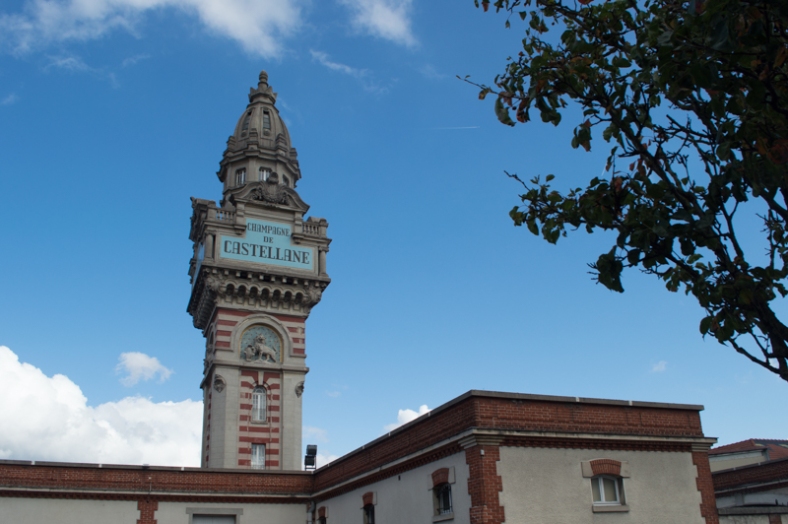 So that’s Champagne country.  When you find yourself in the north of France, dedicate some time to visit the area.  It’s a lovely day trip by car and if you want to spend a little more time, we can recommended a nice B&B.  Tomorrow we’ll visit Anita’s second-favorite town in France, Honfleur, on our way to Mt. Saint-Michel.  Come along with us.